The Orca Open Water RS1 Sleeveless Mens Swimming Wetsuit gives you a great mix of hi tech, warmth and freedom. This suit has no arms, it’s what is also called a Long John. You get coverage from your neck, down your torso to your waist and legs. It’s a versatile design. You get body protection while keeping your high movement areas, arms and shoulders, free. Yamamoto Neoprene is featured and it’s known as the world’s best. You get great warmth due to the insulation properties of the neoprene’s high air cell density. This makes it extremely light, so you’re not carrying extra weight, and also extremely soft, so  you get a great fit.

Great fit is vital in a swimming wetsuit where your immersed in the water. With no arms, the suit still hugs your body. High tech enhancements include SCS silicon that coats your suit’s panels. This greatly reduces your wetsuit’s resistance as you move through the water. This hydrophilic treatment means that with each stroke you go farther, faster, without fatigue. In areas like your neck the suit edges are specially treated so chaffing is minimised.

The Orca Open Water RS1 Sleeveless Mens Swim Wetsuit also has a buoyancy design around your lower body. The neoprene panels give you extra float so your body doesn’t drag giving you a high performance swimming posture. While a swimming wetsuit you also get triathlon features such as the Hydrolite panels that allow the suit to slip on and off very quickly. Great for quick transitions in competition or for getting quickly into and out of your suit before work and after your swim. The exterior of the suit includes stylish graphics. All the great features in the Orca Open Water RS1 Sleeveless Mens Swim Wetsuit give you a you a psychological advantage knowing that when you hit the water you’ll have the edge. The Orca brand is a leader in this field of wetsuits. Check our full Wetsuit range at Manly Surfboards>Wetsuits 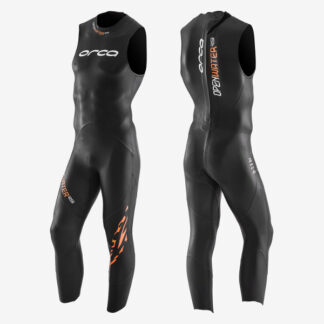