The Superbrand Black Viper Surfboard FCS II is one of the latest designs. Its refined features give you exceptional high performance in your every day surf. The outline gives you a drawn in nose and slightly wider area behind the mid point with a subtle hip bringing in the tail. This gives you a lot of freedom to whip the board into and out of moves. So the nose will smack the lip and swing through cut backs effortlessly, all flowing together. The wide point behind mid gives glide optimising wave power across fat and flat sections. So you always have speed. The hip brings in the tail so by shifting your foot or weight back you get bite and control to put yourself where you want, even on the steepest section.

The Superbrand Black Viper Surfboard FCS II has special rail treatment. They’re mid size and boxy. This means they won’t catch in sloppy and junky surf. They’re also not too thick so as to slow you down, while you’re still able to put your weight on them for gouging bottom turns. If you over balance and push too much the rail will tend to pop out of the wave rather than sink or catch. Attention has been given to volume distribution. Even though the nose is narrow there’s volume there giving you momentum to get into waves easily. From mid back there’s also extra volume so rather than sinking into the wave when your board slows you get float and speed to get into your next section. This is a great board for high performance surfing in your everyday surf. Note this model comes with FCS II fins boxes so will only work with FCS II and FCS traditional fins. Check our full range of Performance Shortboards at Manly Surfboards>Performance Shortboards 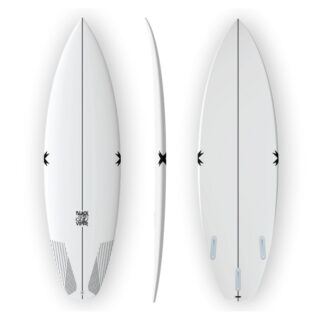