The SUPERBRAND PigDog Surfboard FCS II is a StepUp design that’s versatile, getting you charging in big and smaller waves. StepUp refers to the way the PigDog handles bigger and more powerful surf. However this design also works when it’s smaller. It’s thicker in the nose through to mid way, like on a small wave board, so you get great paddling and wave catching. It’s wider in the nose too so you can plane across fat sections. Pulled in to a rounded pin at the tail you get control. The rounded pin is one of the smoothest tail designs that engages wave power. The reduced area in the tail also gives you bit to really carve into power waves. A single to double concave bottom channels the wave power maximising both straight line and turning speed. To this a low to medium rocker is matched. So the board will move freely on the wave face. It will go where you want.

The rails are fuller so you can you can get the board on rail and drive without risk of catching or bogging. There’s no hip or flyer on the template, just a clean outline. This maximises drive on the open face, good for big drawn out moves and barrelling through tubes. In smaller waves this fuller rail allows you to really put your weight on it for real power moves making the most of limited power. The PigDog is recommended to be surfed 2″ or more in size up from your normal shortboard. The PigDog performs so well across a range of normal to bigger conditions, when traveling, it can replace most of your StepUps, making it the one StepUp in your quiver. 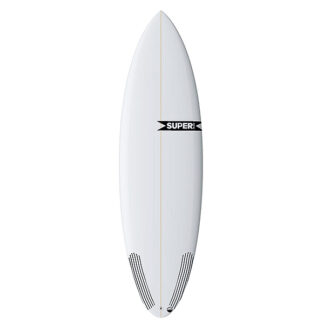