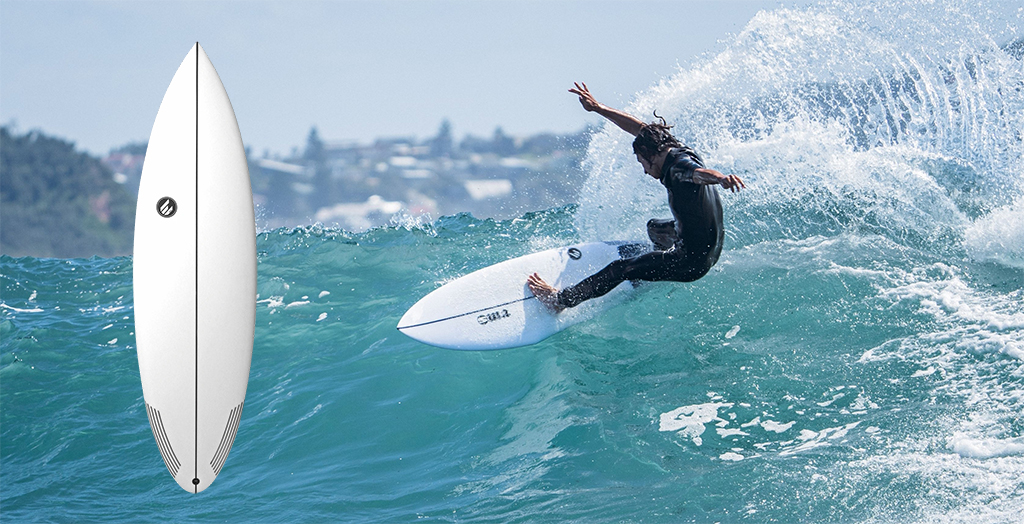 Shortboard normally refers to a High Performance board that will get you surfing faster and doing big power moves, like the Pros

How To Get a HP Shortboard?

Two HP Shortboard head to head. The ECS Cloud 9 on the left and Island Flick Knife on the right. Note the middle image of both boards shows the bottom facing up highlighting the bottom curve or rocker. This is the most important part of the board for performance. Note also the Cloud 9 on the left has a little more curve in the outline while the Flick Knife on the right has more curve in the middle image going out the tail. Minor detail makes a big difference

How do you get that high performance and Pro level surfing in your Shortboard? You can easily come in-store and pick one of our Pro brand boards off the rack. It can be made with super light materials, have the same decals and look as the Pro board. Will having that brand or that model give you what you’re after? What is high performance surfing and how does it differ from the surfing you do on other types of boards?

When you think of a high performance board you’re likely thinking of one that gets you going super fast and being able to do big turns and moves. Performance is relative to your ability so if you get a HP Shortboard exactly the same as that ridden by a Pro surfer on the World Tour it may not give you high performance. Getting a HP Shortboard is all about matching the HP design to you, your physical Type and your ability.

To give you an example, on the World Tour Kelly Slater is 5’8 and has won events on his 5’8 long, 18 5/8″ wide and 2 3/16″ thick board. In comparison, Owen Wright is 6’3 and his event winning JS board is 6’4 1/2″ long, nearly 19 1/2″ wide and 2 1/2″ thick. Both these surfers won events surfing at the elite level though their body types and boards dimensions are different. So a High Performance Shortboard has dimensions matched to your Type as a surfer.

Where to Use High Performance? 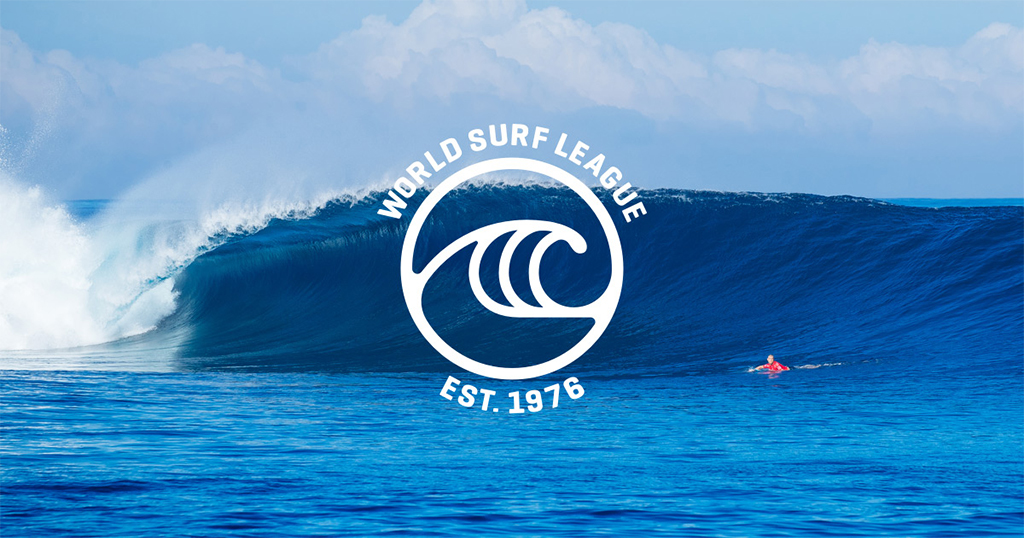 Did you know that on the World Tour, where HP Shortboards are the only boards ridden, they only have events at locations where the waves are known to be great. They also have waiting periods so they don’t surf on days when the conditions are sub-optimal. So your HP Shortboard is designed to give you your best surfing in good waves. It can give you good surfing in sub-optimal conditions however it’s designed to surf in good waves. It’s not an all-round board.

There are other board types made for other conditions. For example Longboards tend to be for easier, longer running waves, doing slow turns and cruising surfing. A Fish is for fuller smaller waves and drawn out bottom and top turns. You can get high performance versions of these boards, like a HP Longboard. These HP versions can be made with high performance materials and be super light. However it’s the design of a HP Shortboard that makes it the ultimate high performance board ridden on the World Tour and that enables moves like the World Tour surfers do. It’s that style of board that will  to give you your highest performance surfing. 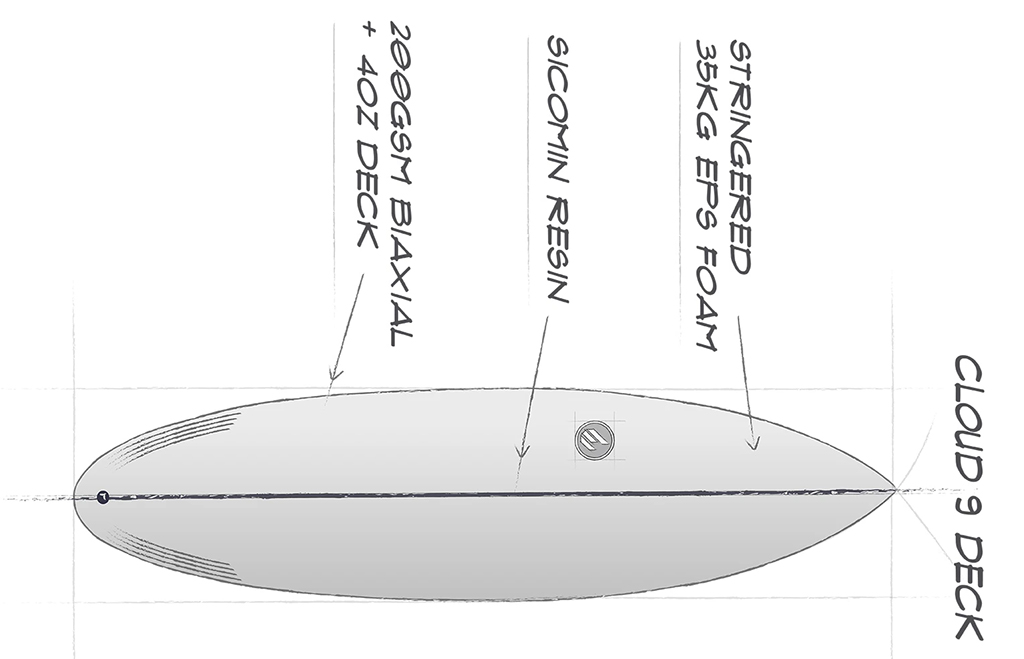 HP Shortboards have specific design characteristics. There’s also material characteristics to make them as light as possible and give them special flex characteristics. The ECS Cloud 9 above uses EPS foam that is lighter and gives more buoyancy. So your board can be thinner with less volume and more responsive rails while still giving you the same floatation. The glassing specifies only a 4oz deck while most stock boards have 4oz + 4oz deck, some have a 6oz + 4oz deck

Even  though HP Shortboards can come with different dimensions there’s general characteristics of their design.  The nose and tail are drawn in. The nose can be needle like. The tail can have a hip then narrow to one of a range of differing tail types. The widest point in the outline is not too wide.
The rocker or bottom curve of the board is perhaps the most important part of the design. Here the Pro surfers have their personal preference. Some have more curve and others are flatter. More curve will generally give more dynamic turns but be harder to keep going fast. A flatter rocker will give speed but be harder to do big turns. Some Pros have the rocker in the front of the board then flatten it out from mid through the tail. Other Pros have a flatter entry and more curve in the tail.
Thickness and rails normally also match the Pro’s preference. Their boards are thin and light, so the rails are generally fine and the board has little thickness. There’s less volume so whatever energy goes in, in terms of paddling and pumping, the board will maximise. Whatever power the wave has, the board will maximise.
A thin board means there’s not much under your feet so your smallest weight shifts will be directly transmitted into your board’s response. For example shifting forward for more speed, weighting-back for turns. Pushing on the rail to get the board carving. A thin board though means less volume, less floatation and harder paddling.

Can you tell the difference between these two HP Shortboards? These boards are fine tuned with slight differences in design and shape making a big difference to your surfing. Come in-store and let us help you work through the fine detail and get your surfing progressing fast

The HP Shortboards are fine tuned, so the Pros have many boards with only minor differences and can change their board for the waves. So they may go a slightly wider board for smaller, slower waves. Or a board with more rocker for a steeper wave.
If you have the option to get a few boards should you go for several HP Shortboards with fine tuning? Or should you go one board optimised for groveling small waves, another like a Fish, then another slightly longer Mid Length for bigger waves or cruisier surfing?
It comes back to what your original objective is. If you want to surf like a Pro then you need a HP Shortboard.

A HP Shortboard is a challenge. It’s not fun and easy. The Pro’s surf all day everyday and train in terms of fitness, diet and mental approach. All this is behind their performance on their HP Shortboard.
If you go for a pure Pro-Style HP Shortboard it will be hard to surf. First up it will be hard to paddle out into the lineup as it will not have much volume.
It will take a lot of your effort to get into waves. You’ll have to change the way you catch waves to be right on the critical part of the wave and your timing will be critical to be right on the peak when the wave’s breaking to catch it.
On the wave you have to continually keep the board moving as if you slow down it will sink under you. You have to ride in the critical part of the wave where the wall is steepest and where there’s the most power. A bit of over balance and your board will catch and wipeout.
However once you start to get the hang of it, your HP Shortboard will deliver you incredible performance progressing you towards Pro-style surfing.

If your objective is a HP Shortboard then there is challenge involved. Are there alternatives?
Incremental steps means making small steps in your board design to move towards ultra high performance. For example you can get a board that has a wider nose with narrower tail and still has a bit of volume. This will give you easier paddling and wave catching. Once on the wave you’ll be able to put your weight back and to power carving turns on the tail that is similar to that of a HP Shortboard. This way you’ll be having fun surfing. You’ll see results in your effort and and move step by step to higher performance surfing.
The design described above is one that Kelly Slater used on the Pro tour. Taking a drawn in tail Kelly added a full Fish style nose so he could get into waves at Pipeline more easily. Then once on the wave could still hold in the super sucky barrels.

Kelly Slater designed the above board called a Wizards Sleeve. He took a tail of a high performance board made for surfing bigger waves and put a full nose on it to make it easier to catch waves

Another option is to get a board with a lot or rocker. Most boards sold have been ‘dumbed down’ for consumers. So they’re flatter so that they give you a feeling of going fast. The tradeoff is that they are hard to turn, or will most of the time push you into a straight line on the wave. The more power in the wave the faster you go and the harder it is to do a turn. A board with rocker will allow you to do more turns. This is what high performance surfing is all about. So you can go to the bottom then carve straight to the lip. Then smack the lip and repeat. This type of board will be harder to paddle and harder to keep going on the wave. So it will need a little more volume to compensate.
Another step you can take is to get your board with super light glassing. This means your board will not last as long. It will dent, maybe break. However while riding you’ll find it much more responsive and feeling super lively. It will be easier to throw into bigger turns, float across close out sections and help you go harder.
There’s a few options you have open to progress to high performance and still have some fun.

Come in-store and see and feel our board range and the differences in the board types. A HP Shortboard is so fine tuned it’s good to have an expert guide you around the slight differences in the boards.
Your HP Shortboard is matched to you. Your body type and your ability. We take the time to work with you to get the optimal board for your surfing right now and to take you into your surfing future.