Longboard Fins are an essential part of your surfing gear. They greatly affect the way your board performs and the way you surf. While part of your board’s characteristics are in your board’s shape your choice of fins also has a major impact on how you ride. Mini-mal Fins and Mid Length Fins can also very similar if not identical to those for your longboard.

Fins can optimise your board for entirely different styles of surfing. For example, from driving and carving, to walking your board to hang toes-off-the-nose, for shortboard-like performance to soulful cruising, your choice of fins make all the difference.

It’s rare that you will find a new longboard with a fixed glassed-in fin. All modern era longboards fall into one of 3 categories regards their fin system.

Even with latest tech longboard fins are still produced in the way they were first constructed. Layers of fibreglass and resin are laid down, template shape cut out then foil sanded in. This image is from Island Fin Design

Center fin boxes allow you to slide your fin in and move it to different positions. You can see the slot where the pin in your longboard fin slots in

A center fin box is a 10″ or 12″ box in the tail of your board. The box is longer than the base of your fin, normally at least 2 to 3 times longer. So once you place your fin you’re able to slide your fin within the box. Once you position your fin where you want you tighten a screw and your fin is secured in place.

The reason why the fin box is adjustable is that your fin placement also affects your surfing performance almost as much as the fin.

For example placing your fin towards the rear of your adjustable fin box will tend to make your board pivot and carve more. It won’t feel as free or responsive but will draw out turns. Fin placement towards the front of the box will give your board more turning and slide or skate.  You will feel your board loose on the wave, sliding down the face and being able to turn easily. However the trade off is that you will loose some of your forward movement.

Fin For Your Center Box

You have a lot of variety available in your longboard fin selection. Here’s 3 fins. The left fin is very upright so will give you pivoting turns. The next fin has a lot of sweep meaning it slopes towards the rear. This fin will give you a feeling of driving down the line along the wave. The last fin is upright at first then has a lot of sweep as you approach the tip. It’s designed to give you a balance between drive and pivot

The fins you use in your center fin box affect your ride.

With more area in your fin, the bigger it is, the more it will keep your board holding it’s line. The more you push on the fin the more powerful your turn and carving will be. This area will also make the fin stiffer so your board won’t be as responsive. It will need more energy to turn overall.

The less area in your fin the more loose your board will feel, sliding and skating. A smaller and narrower fin can be used for trick surfing where you purposefully slide your board tail out of the wave and do 360s.

Generally optimum fin characteristics are to have a taller fin with medium rake and some flex. Your board can feel loose while still having hold and not skating out. A fin with a wider base will give you more drive. Though the more area in your fin the more it will slow your board down, the area creating drag when you do any type of direction change.

All these fins are from Futures fins with a base for a standard single fin box. Check the difference. The first two fins have the same base size yet diverge radically with regards to their area. The front Tiller will give you hold in a finer board. As it is so thin it will have a lot of flex. Great for a lighter rider or to be used in a 2 + 1 setup. The middle fin is the Futures Rudder. This fin will give a lot of hold and direction. There is so much area it won’t be that responsive. However if you want to walk your board to the nose it will hold your tail in and give you stability. The last fin is the Admiral. It has a smaller base so will not have as much drive and is suited for a smaller lighter longboard. Mini-Mal Fins or Mid Length Fins could have these type of charactertistics

If you want to walk your board and go to the nose to hang 5 or 10 you need your board to be able to hold it’s direction and hold in the wave when your weight is up on the nose. So a larger stiffer fin will give you those characteristics. Certain fin shapes, such as the Hatchet, have also proven to help for this type of surfing.

If you want to do a lot of carving turns on the wave face, dropping down for a bottom turn then rising and coming off the top swinging around for a cut back, then a taller fin with a wide base and flexier leaner top half will give you a lively feel.

Between these two types of surfing there’s a fin that is like a bigger version of a rear shortboard fin and this gives stable performance. You point your board where you want it to go and your board goes there.

Side Bites are fins used in the side boxes of a 2 + 1 setup. They’re very similar to shortboard thruster side fins, though a little smaller with less area. On the left is an FCS II Side Bite, on the right a Future Fins Side Bite. They are very similar in shape however you can see the Future fin has more base in contact with the fin box so will have a greater though perhaps marginal effect

However there are generally specific fins that are used in the side boxes and these are called Side Bites as they give the board more bite on the wave face. They’re usually not as big as shortboard thruster fins, they’re smaller with less area and they also tend to have more flex.

These are the fin boxes used for the Side Fins. FCS II on the left. Future Fins on the right. These are the type of fin box choices you have for your 2 + 1 fin setup

In general Side Bites added to your center fin box give your longboard more performance. It has more of a shortboard feel. You can take off and drive quickly on the wave face. When you turn your board is responsive, doing shorter arc turns, not drawing turns out too much or sliding.

You can also surf with just Side Bites like a Twin Fin longboard. It gives you speed and a sense of freedom if you get the right size Side Bites. If they’re too small you can lose drive and slide out. If they’re bigger you can get a real fun feel. 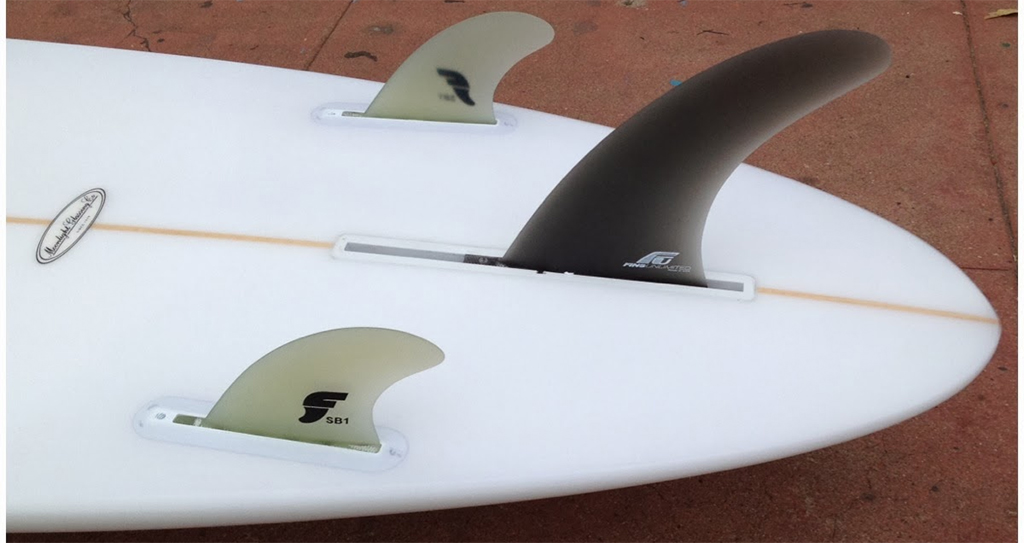 Classic 2 + 1 fin setup. The rear fin uses an adjustable fin box with a tall fin with reasonable base. The side fins use a Future Fins fin box with Future Fins with smaller base and height. This type of setup is also widely used for Mini-Mal fins and Mid Length fins

The fins you used in your 2 + 1 longboard setup can be used as Mini-Mal Fins and Mid Length Fins.

In this setup your center fin tends to not have as much area or height. It’s leaner, finer, with more flex. The reason for this is that the more total fin area you have the more drag your fins tend to give you. For example Mini-Mal Fins and Mid Length Fins that have too big a center fin will have a lot of drive but as soon as you start a turn they’ll bog as the water won’t pass smoothly between the fins.

As the area of the center fin decreases the size of your Side Bites can increase. Mixing the relationship between the center and side fins can give you fine control over your surfing.

This image shows a Mid Length surfboard, that is the same length as a longboard. Note it has a Quad setup with a 5th rear fin box as well so you have a lot of versatility. The inset shows the FCS II fins used for the Quads. Note the larger front fins and smaller rear fins. This gives you a lot of drive into turns balanced with release as you come out of the turn

The third setup for your Longboard Fins is to use Quad fin systems only with no adjustable center fin box.

This gives you all the benefits of Quad surfing. You get speed, hold, carving.

The only draw back is that depending on your board tail rocker you can feel like your board is tracking, this means holding a line. With a Quad setup your board may not feel as loose, however you can change the Quad fins to be smaller or have more flex and so get a looser feel.

Mid Length Fins setup as Quad are more common. You will find the board rocker will be designed especially for this setup. Quad fins as Mini-Mal Fins are not used as often, however this setup can give you a lot of straight line speed and speed equates to fun. It won’t necessarily help your turning though.

You can see the base of the FCS II Longboard fins use a special setup with a rear catch that removes the need for a screw to secure your fin into your board. You simply pop your fin in and pop it out

FCS Fins deserve a special mention as FCS has come up with a unique, super versatile and easy to use design of the base of their fins.

The FCS II  fins will fit just about any center fin box and they don’t need to be screwed in. They simply pop in and pop out. This means you don’t need any screwdriver or hex key. This opens up the ability for you to easily swap fins and test out different performance and styles.

Come instore to check the fins. Compare them side by side. Feel the flex. So you can make in informed decision on your longboard fin choice. These great fins are from our stock of Island Fin Designs

Holding a fin in your hand you can compare the area, base and height between fins. Flex can be felt in your hands. With this tactile knowledge when you surf you get a much better understanding of how a fin has affected your surfing performance and your style. You can come and try another fin with different characteristics to give you your own special type of surfing.

This is even more important with Mini-Mal Fins and Mid Length Fins where the fins can be much more refined and give you much more performance and fun in your surfing.