When Choosing Longboard Fins you get to enjoy the best of surfing’s history and future like in no other part of our sport. The single longboard fin is classic, taking you back close to where it all began. New fin designs and tech are also on  hand that can radically improve your surfing experience.

Longboarding can be a whole different world than shortboarding where it’s not all about performance but just fun and timeless moments. Below, why make fins like this? Just for the beauty

The first recorded surfboard fin on the left. The latest longboard fin from FCS on the right. Note the FCS II cassette in the fin. It fits almost any box and requires no tools

While shortboard surfing is all about performance, longboarding has both performance and purely aesthetic aspects. If you want to perform you’ll need fins fin tuned to your board, your body-type, and the way you want to surf. If you’re out for fun you could use almost any type of fin.

Above, an alaia with no fin on the left. On the right, retro moves possible through a combination of fin and board choice. Below, original ‘D’ shape glassed on fin and modern take. In longboarding old is new whenever you want. Fins continue to work as well as they ever did

The progression of the surfboard fin starts from alaia surfboards with no fins, to wooden water craft with keel type fins, to glassed on fins, then to the fins with boxes we have today. Through this continuum of change the principles that govern the effectiveness of a longboard fin have remained the same.

So what are Longboard Fin Principles? 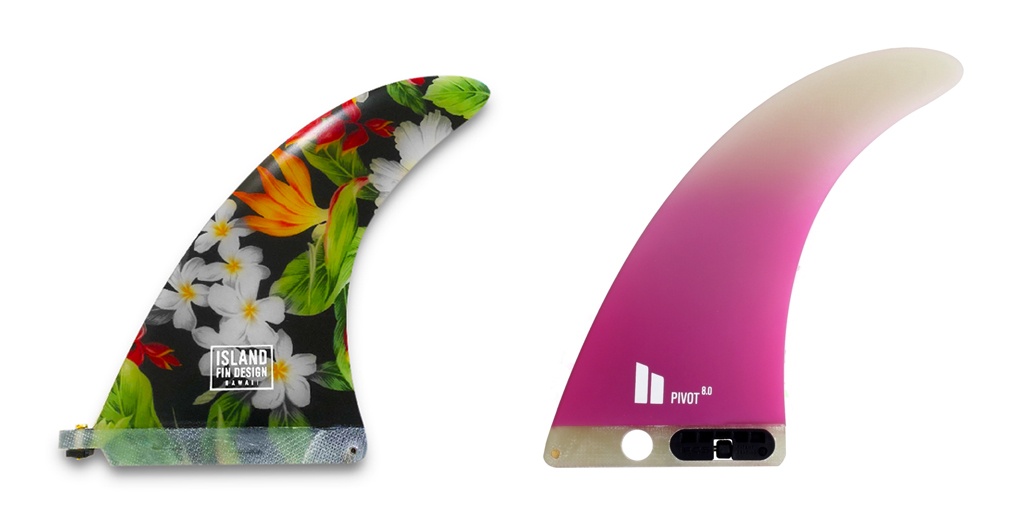 Fin base and height and the way they are combined determine how a fin will help you surf. The fin on the left- the wide base will give you drive and direction, the narrowing tip will flex helping turn in carving turns. The fin on the right- the narrow base will help with looseness for easier shorter turns. The longer height will give bite in the wave so less likely to slide out in steep sections. But this fin will not have as much forward direction and drive as the fin on the left as the base is narrower

Two fins with wide bases. Both will give drive. The fin on the left with width carried to the tip will drive more and do carving turns but will be harder to do short arc turns and not be so loose. The fin on the right with a wide base to tapering tip, recommended for all round surfing where you get a balance of drive from the base with looseness and turning from the narrowed tip

For example, if you want to carve down the line you go for a wider base fin. This fin will direct wave energy. It will also give you more control in more powerful-bigger waves. As a fin gets wider to the tip you get more forward direction but it gets harder to break this forward direction. With too wide a fin your board will feel hard to turn.

Wanting to do more turns a narrower base fin with more height gives you looseness feeling easy to turn. If the fin is tall it will give you bite so won’t slide out. If the fin is too narrow it won’t direct enough wave energy to provide forward direction though. 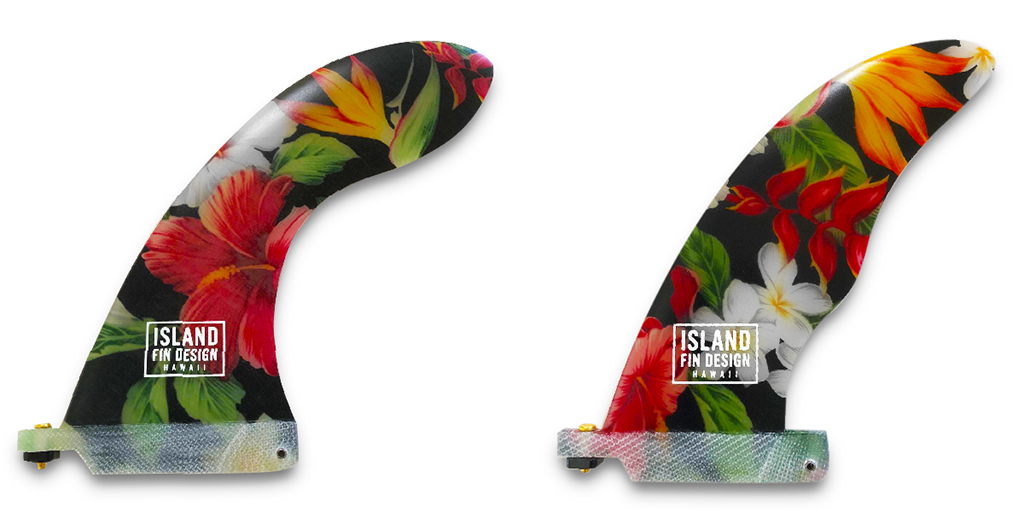 Both fins have a narrower base. The fin on the left has a ‘wing’ tip. This adds area to compensate for the lack of base so you will still get forward drive. This fin will flex into your turns and still give you hold. The fin on the right is a cutaway. This fin is designed for more top to bottom loose surfing but would lack drive so is often paired in a 2 + 1 setup

Keep in mind that a fin has certain limit in terms of size. So if the fin is too big, with too wide a base and too tall it will create drag and not work. This discussion of drive and looseness is all relative to the way your surfing feels now with your current setup.

So choosing longboard fins, if your board feels too stiff and hard to turn then try a narrower base and taller fin. If your board seems to lack forward direction and drive try a wider base fin.

While a good surfer can surf well on almost anything, the longboard single fin setup does have inherent limitations. It’s best at doing turns at the bottom of the wave and at the top of the wave. It’s not good mid face, turning the way a shortboard turns. 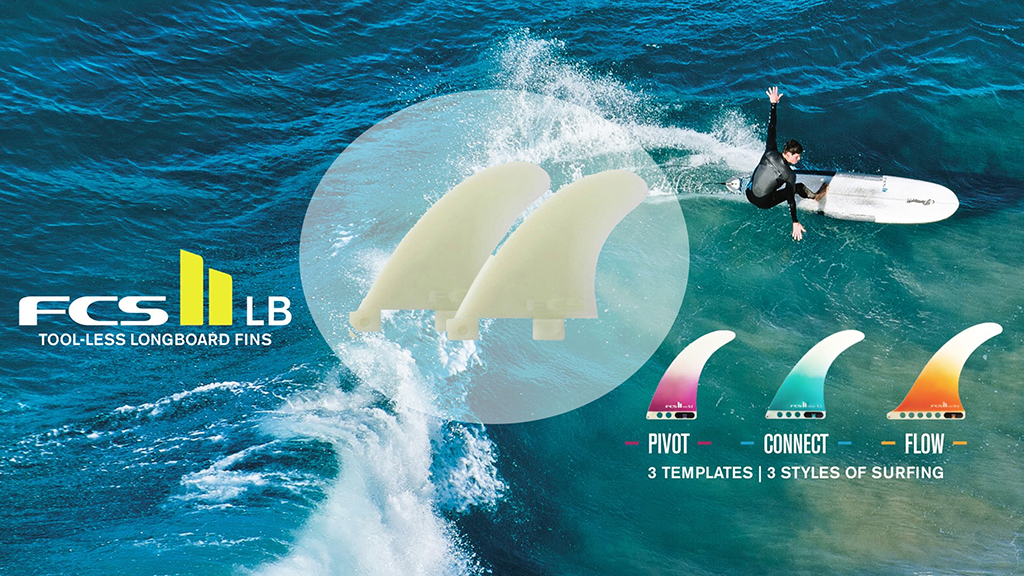 The 2 + 1 fin setup consists of 2 smaller side bite fins with a single fin in the rear. It provides more shortboard-like performance

A very popular fin setup that helps give you some of the characteristics of shortboard performance, such as speed and manoeuvrability, is the 2 + 1 setup. This is where you have a single fin in the back with two side fins.

This setup provides a blend of speed, drive and looseness. The rear single fin is normally not as large as a traditional longboard single rear fin. The side fins are not as big as normal thruster fins though they may be similar in shape. 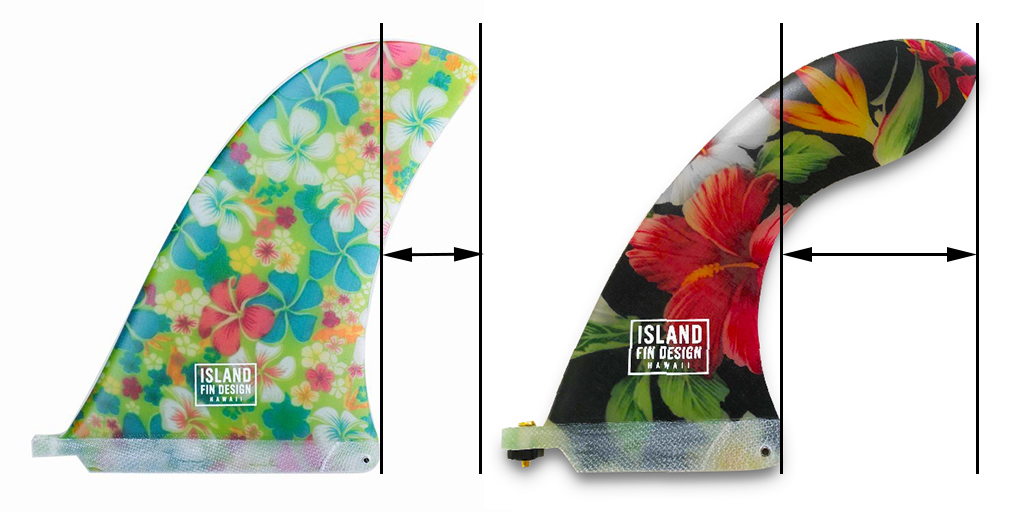 Fin creators are constantly looking for ideal combinations of fin characteristics. Base, height, rake-sweep, flex and foil to match different board designs. You can look for the fin to match the way you want to surf.

A beautiful board with fin box. Note the fin is positioned right to the front of the fin box. So providing greater looseness meaning easier but shallower turning

Most longboards come with a fin box for the rear fin. This box allows adjustment of your fin opening up another aspect of fin performance.

Above, fins being cut out of solid fiberglass. Below, the foiling

Longboard fins appear very solid, commonly carved out of a block of fiberglass. However materials and foil come into play. Foil is the way the thickness of the fin is shaped from the front to the back. Most fins have a foil with their thickest point at the base and at the front of the fin. From there some fins remain thick while others are fine foiled to the tip.

So in your surfing, a too finely foiled fin will bend in the wave and not give you direction. A too stiff fin will direct you but not turn and tend to hop in the wave. The just right foil will give flex to your fin ideally making your board feel like it’s surfing with you.

Three different FCS fin materials giving different fin experiences. PC Carbon on the left stores up wave energy in flex. Releasing it with resilience as you go in and out of turns. Traditional fiberglass has a more linear consistent flex and release. The urethane entry level fin is soft and forgiving

Similarly, materials can give a fin controlled flexiness to achieve a certain feel and performance. The latest carbon additions to a fin can load up wave energy. So it flexes as you go into a turn and releases that energy as you exit. So you get easier turning and good drive and projection.

How To Get The Best Fin

Longboards can perform. Is this how you want to surf? Check out WSL charger and FCS Team Rider Harley Ingleby and explore what he’s riding

Whether you’re out for performance or enjoyment, the best way to improve your fin experience is to explore and experiment.

Experiment. Once you’ve come upon someone you like, try the equipment they use. This can be tricky as you have to take into account their board and body size.

The FCS II Longboard system with cassette built into the fin. It fits almost all fin boxes and fins can be swapped by hand even out in the water so making your experimentation super easy

FCS are pushing innovation with a great performing longboard fin range with new tech that makes it easy to experiment to find a perfect fin setup. The FCS II longboard system has built a cassette into the fin so no tool is needed to insert or move your fin. This makes it super easy to swap and try different fins and to adjust fin position even out in the surf.

It makes experimenting for your perfect fin setup fast and easy.

One thing about experimenting is that it’s best done in the same surf session so you get consistency as waves of even the same size can change in power from day to day changing how you think a fin performs.

You may want to focus on one aspect of your longboarding, say nose riding. Characteristics in your board can help nose riding such a wider nose and narrower tail combination. Having the right fin can also help. A fin that is taller helps hold your board in the wave while all your weight is hanging off the nose. A specific fin shape, called a Hatchet, gives both reasonable height while maintaining width. It can optimise your time on the nose.

This FCS II fin is a great all round shape. The FCS II sydtem, not only functional and innovative but looking great

Riding small waves and want to perform bottom turns and cutbacks? You could try out either a wide base and shorter fin. Or a fin with less base or area that’s taller. As waves get bigger you need more area in the fin to control the power. So go for a wider base and taller more area fin.

Whether for performance or beauty, your longboard surfing can progress with the right fin. There’s no reason not to have a fin quiver. Variations between fin width and height, rake and sweep, can increase the depth of your longboard fun, enjoyment and performance.